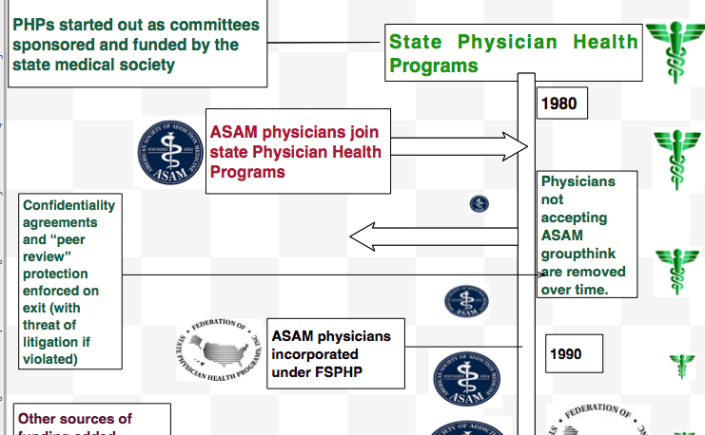 These ASAM “addiction experts” have become so numerous they have been able to take over almost all the state Physician Health Programs (PHPs). Their national association—the Federation of State Physician Health Programs (FSPHP)–has a stated goal of universal acceptance of the 12-step doctrine: lifelong abstinence, and spiritual recovery as the one and only treatment, as spelled out in the “PHP Blueprint.”

Very much like Straight, Inc in the 70s and 80s, they have cast a wide net with doctors to ensnare them in an endless loop of drug testing and rehab—whether the tests are fabricated or not. The doctors will enjoy no sympathy from the public, and complaining about it is deemed a sign of your “disease.” Furthermore, ASAM recommends that physicians only be referred to “PHP approved” facilities.

The medical directors of these facilities can all be found on this list of ”Like-Minded Docs.” Surprisingly, many Like-Minded Docs were former addicts and alcoholics, some even with criminal backgrounds. There are felons and even double-felons on the list.

And the program is expanding. The organization that oversees the licensing for all medical doctors, the Federation of State Medical Boards, adopted a new policy and approved the concept of “potentially impairing illness” and the Orwellian notion of “relapse without use.”

Signals for “impairment can be as benign as not having “complete accurate, and up-to-date patient medical records” according to Physician Health Services, the Massachusetts PHP. Despite the overwhelming amount of paperwork Doctors now have, incomplete or illegible records could be construed as a red flag, since as Associate Direct of PHS Judith Eaton notes “when something so necessary is not getting done, it is prudent to explore what else might be going on.” The question is, who is next?”

The Sick Physician: Impairment by Psychiatric Disorders, Including Alcoholism and Drug Dependence, published by the American Medical Association’s (AMA) Council on Mental Health in The Journal of the American Medical Association in 1973,1 recommended that physicians do a better job of helping colleagues impaired by mental illness, alcoholism or drug dependence. The AMA defined an “impaired physician” as “a physician who is unable to practice medicine with reasonable skill and safety to patients because of mental illness or excessive use or abuse of drugs, including alcohol.”

Recognition of physician impairment in the 1970s by both the medical community and the general public led to the development of “impaired physician” programs with the purpose of both helping impaired doctors and protecting the public from them.

The 1975 media coverage of the deaths of Drs. Stewart and…