The Birth of Junk-Science in Drug and Alcohol Testing

The attached article concerns the reliability of hair-strand tests routinely accepted in child welfare cases in Ontario   as evidence of parental drug or alcohol abuse.  A positive test can lead to loss of parental custody of children.

The risk for false-positive results appears to be higher in women because of the higher use of alcohol-based hair products and the limitations of these tests are addressed in the article.

Ethyl Glucuronide (EtG) was introduced in 1999 as a biomarker for alcohol consumption,2 and was subsequently suggested as a tool to monitor health professionals by Dr. Gregory Skipper, M.D.,  because of its high sensitivity to ethanol ingestion.3

This minor metabolite of alcohol was reported by  Skipper, M.D. and Friedrich Wurst, M.D., in November 2002 at an international meeting of the American Medical Society, to provide proof of alcohol consumption as much as 5 days after drinking an alcoholic beverage, well after the alcohol itself had been eliminated from the body.

In his study Dr. Skipper arbitrarily chose a value of 100 as a cut-off for EtG. The rationale behind this value is not cited.

In 2003, because of these and other reportedly remarkable results (e.g., positive findings, confirmed by admissions by the tested individuals, after traditional urine tests had registered negative), Skipper pitched the test to National Medical Services, Inc. (NMS labs) and it was developed as a Laboratory Developed Test (LDT).

So began EtG testing began in the United States, and this paved the way for the hair tests described. The urine EtG test introduced by Skipper is the index case and prototype for an array of unproven forensic tests introduced to the market as LDTs.

The LDT Pathway was not designed for Forensic Drug and Alcohol Testing.  It is an Unregulated Industry.

The LDT pathway was developed for laboratory tests that would not otherwise come to market due to the prohibitive costs of FDA approval (for example a test for a rare disease).

Bringing an LDT to market does not require testing in humans (in vivo). Nor does it require that it be shown the test is testing for what it is purportedly testing for (validity). It is essentially an honor system. It was not designed for “forensic” testing but for simple testing with low risk.

None of this testing is approved by the FDA. It is essentially an unregulated industry.

NMS became a leading proponent of EtG testing and, starting in 2003, began publishing claims promoting the absolute validity and reliability of the EtG in detecting alcohol. Akin to the vitamin and supplement industry those promoting and selling the tests could say anything they want—and they did.

NMS initially established a reporting limit or cutoff of 250ng/ml at or over which EtG test results would be reported as “positive” for drinking alcohol. This was later upped to 500ng/ml, then 1000 ng/ml.

NMS reported it as the “Gold Standard” claiming any value above 250 ng/ml indicated “ethanol consumption.”

It was subsequently found to be so sensitive that it could measure incidental exposure to alcohol in foods, over the counter cold medications, mouthwash4,5, hand sanitizer gel6, nonalcoholic beer7, and nonalcoholic wine.8

As the cutoff value got higher they added another minor metabolite of alcohol, EtS, as a “confirmatory” LDT.

The authors of a 2011 study demonstrating that hand sanitizer alone could result in EtG and EtS concentrations of 1998 and 94 mug/g creatinine concluded that:

“in patients being monitored for ethanol use by urinary EtG concentrations, currently accepted EtG cutoffs do not distinguish between ethanol consumption and incidental exposures, particularly when uine specimens are obtained shortly after sustained use of ethanol containing hand sanitizer.”9

Sauerkraut and bananas have even recently been shown to cause positive EtG levels.10 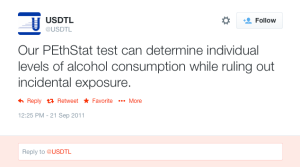 A 2010 study found that consumption of baker’s yeast with sugar and water11 led to the formation of elevated EtG and EtS above the standard cutoff. EtG can originate from post-collection synthesis if bacteria is present in the urine.12 Collection and handling routines can result in false-positive samples.13

EtG varies among individuals.14 Factors that may underlie this variability include gender, age, ethnic group, and genetic polymorphisms.

“Exposure to ethanol-containing medications, of which there are many, is another potential source of “false” positives.15

Quoting Dr. Skipper, among others, the article includes:

“Little advertised, though, is that EtG can detect alcohol even in people who didn’t drink. Any trace of alcohol may register, even that ingested or inhaled through food, medicine, personal-care products or hand sanitizer.”

“The test ‘can’t distinguish between beer and Purell’ hand sanitizer, says H. Westley Clark, director of the Federal Substance Abuse and Mental Health Services Administration. . . ‘When you’re looking at loss of job, loss of child, loss of privileges, you want to make sure the test is right”, he says…”

“Use of this screen has gotten ahead of the science,’ says Gregory Skipper…”

Methinks Dr. Skipper might have realized this when he initially proposed it as an accurate test after a pilot study done on only a handful of subjects. Or perhaps when he used the LDT pathway to bypass FDA approval and oversight.

On September 28, 2006, SAMHSA, a federal agency that is part of the U.S. Department of Health and Human Resources, issued an Advisory, which on the first page contained a “grey box” warning, as follows:

“Currently, the use of an EtG test in determining abstinence lacks sufficient proven specificity for use as primary or sole evidence that an individual prohibited from drinking, in a criminal justice or a regulatory compliance context, has truly been drinking. Legal or disciplinary action based solely on a positive EtG, or other test discussed in this Advisory is inappropriate and scientifically unsupportable at this time. These tests should currently be considered as potential valuable clinical tools, but their use in forensic settings is premature.”17

Bias has been identified as a large problem with drug trials.18   Industry-sponsored research is nearly four times as likely to be favorable to the company’s product as NIH-sponsored research.19 As an example, one survey of seventy articles about the safety of Norvasc (amlodipine) found that 96% of the authors who were supportive of the drugs had financial ties to the companies that made them.20

But what about the multi billion dollar drug-testing industry and the financial ties here?

Imagine if this was a drug and not a drug-test.

Essentially Greg Skipper and the FSPHP arm of ASAM launched a very lucrative joint business venture with a commercial drug-testing lab. They introduced the test via a loophole as a laboratory developed test.  An LDT has no FDA regulation so the lab was able to promote, market and sell these tests with no meaningful oversight or accountability.  Quest Diagnostics and USDTL are now working with the FSPHP and engaging in the same scheme.

The lab then contracted with state licensing boards and their state PHPs (who designed, implemented and managed drug and alcohol testing programs for nurses and doctors).   A mutually beneficial scheme for the labs (who collect the samples) and the PHPs (who utilize, interpret and report the results.

The PHPs develop the arbitrary cutoff levels based on alleged “scientific” research and the labs promote whatever they say. “Gold-Standard,” “accurate” and “reliable.”

How many lives were ruined by this test?   How many careers were lost, families shattered and futures erased. I would venture to say a lot. Just look through all of the legal cases as I have. It is unconscionable. Sociopathic profiteering.

How many committed suicide feeling helpless, hopeless and entrapped?

At the end of a talk entitled  Addicted Professionals: intervention, Evaluation and Treatment, Skipper presents a slide reading “Reporting or Assisting a Troubled Peer?  These doctor’s can’t help themselves….” followed by graphic images of physician suicide.   (see torrance_meeting_2 (4) ).    It is for shock value and morbid humor and it is grotesque.   He could not care less that these were human beings with wives, husbands, children and hopes and dreams.

How many scenes like this were repeated across the country because this guy gamed the system to get an ultra-sensitive test with abysmal specificity for a ubiquitous organic compound approved and marketed as a “forensic” test?

Forensic testing needs to be as close to 100% specific as possible because the results of a positive test can be grave and far reaching.   Getting this test (and all the others) approved and marketed through a loophole and then getting the state Boards and Federation of State Medical Boards to approve them by moral entrepreneurship is unconscionable.    Using the LDT pathway is just another example of how the “impaired physician movement” removes accountability and culpability by bending, ignoring or otherwise making their own rules.

And the labs have taken a “stand your ground” approach. Never admit wrongdoing. Never settle.

In a February 2007 article in the magazine “New Scientist,” Dr. Skipper is quoted

“…there is not yet an agreed threshold concentration that can be used to separate people who have been drinking from those exposed to alcohol from other sources. Below 1000 nanograms of EtG per millilitre of urine is probably ‘innocent’, and above 5000 booze is almost certainly to blame. In between there is a “question zone…”

No Dr. Skipper—it is you who is most certainly to blame. And what of all the people whose lives you ruined by introducing junk science with no evidence base via a regulatory loophole?? “probably innocent?”   Shame on you Dr. Skipper…. Shame..shame..shame.

7 thoughts on “Reliability of hair drug tests up for debate”