Drug Companies and Doctors: A Story of Corruption.

What we need is a Marcia Angell to take on the multi-billion dollar drug and alcohol testing, assessment and treatment industry.

While all eyes were focused on the drug companies these multi-billion dollar industries erected a scaffold of immunity and profit by removing (and blocking) themselves from essentially all aspects of accountability; answerability, justification for actions and the ability to be punished by outside actors.    The 2009 quote in reference to “big pharma”  is just as applicable to the drug and alcohol testing industry,”  the inpatient assessment and treatment centers and the “authorities” pushing public policy and swaying public opinion to accept irrational and illegitimate authoritative opinion as truth.

And unlike the pharmaceutical industries carefully constructed “bent science” which requires a keen eye and critical analysis , the evidence-base supporting the testing, assessment and treatment industry rests on a foundation that can be aptly characterized as illusions and lies.  The “science” is not just “junk-science” but junk-science of the lowest order–examples of confirmatory distortion and data-dredging to make the data fit the hypothesis abound.   The conflicts-of-interest are not potential but incestual with many of the key players putting their hands in every slice of the pie!

The bad science, bad medicine, bad policy and  bad actors are easy to identify. It would be like shooting fish in a barrel.

So what are the barriers?

Why has this not been done?

The answer to that is complex but  involves a confluence of factors including psychological, political and cultural.  “Feel good fallacy,”  “political correctness, and moral and policy entrepreneurship have effectively swayed the targets intended.  The well-funded misinformation and propaganda was cast with a large net using the same techniques others have successfully used throughout history to accomplish the same.  Moral panics, moral crusades, and a plethora of logical fallacy have been used and used with considerable resources and skill.

So what can we do about it?

The first “step into the breach” is to identify the problem with the first one being the Emperor has no clothes.  Once this is acknowledged it would not take long to address directly the specific problems and erroneous assumptions of this paradigm through the lenses of science, critical reasoning, ethics and common sense.  If this were to be done the entire Potemkin village would fall like a house of cards.

But the very first and simplest step is to use your voice to question this authority. Make it be known. 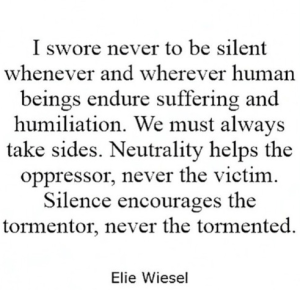 History teaches us that silence and secrecy are often the most effective tools of power.   It hides things including very bad things.  It is time to shine a light on this dank dark corner of the medical profession.

It is simply no longer possible to believe much of the clinical research that is published, or to rely on the judgment of trusted physicians or authoritative medical guidelines. I take no pleasure in this conclusion, which I reached slowly and reluctantly over my two decades as an editor of The New England Journal of Medicine” – Marcia Angell

“At times to be silent is to lie. You will win because you have enough brute force. But you will not convince. For to convince you need to persuade. And in order to persuade you would need what you lack: Reason and Right”
― Miguel de Unamuno

“I have always found it odd that people who think passive aggressively ignoring a person is making a point to them. The only point it makes to anyone is your inability to articulate your point of view because deep down you know you can’t win. It’s better to assert yourself and tell the person you are moving on without them and why, rather than leave a lasting impression of cowardness on your part in a person’s mind by avoiding them.”
― Shannon L. Alder

Staying silent is like a slow growing cancer to the soul and a trait of a true coward. There is nothing intelligent about not standing up for yourself. You may not win every battle. However, everyone will at least know what you stood for—YOU.”
― Shannon L. Alder

8 thoughts on “Drug Companies and Doctors: A Story of Corruption”