The Displacement of the idea that facts and evidence matter, by the idea that everything boils down to subjective interests and perspectives is — second only to American political campaigns — the most prominent and pernicious manifestation of anti-intellectualism in our time. — Larry Laudan, Science and Relativism (1990)

“Miss Ruiz, an administrative assistant for Metal Trading Inc. in Manhattan, received the traditional laurel wreath, a medal and a silver bowl for her victory,” According to the New York Times

Ruiz was unknown in the running world and her victory raised suspicions.  After studying marathon photographs she didn’t appear in any of them until the very end and conducting interviews.

The problem was that, according to Runners World: “Ruiz had dropped out of the race, hopped on the subway, got off about a mile from the finish line, and ran in from there.”   It is believed Ruiz intended to jump in in the middle of the pack but miscalculated when she joined so close to the end not realizing she was ahead of the other 448 female runners.

Marathon officials stripped Ruiz of her title on April 29, 1980, and named Jacqueline Gareau of Canada the women’s division champion with a time of 2:34:28.  It was later discovered that she had also taken the subway during part of the New York City Marathon which qualified her for the Boston Marathon.  In 1982 she was caught stealing money from her employer and was subsequently caught selling drugs to an undercover officer in Florida. 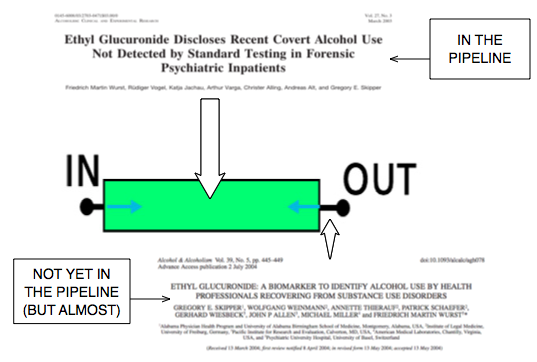 In the early 1950’s it was discovered that a small fraction of ingested alcohol in rabbits gets metabolized by conjugation with glucuronic acid to form Ethyl Glucuronide (EtG)..1,2 The potential of EtG as a marker for alcohol consumption was recognized in the 1990s and analytical methods for its determination were developed in urine, blood and hair.3-5

It’s use as a marker of alcohol consumption in forensic settings was subsequently suggested by Dr. Friedrich Wurst based on studies showing that urine EtG could be detected after complete elimination of alcohol from the body (up to 80 hours), and he suggested the alcohol biomarker be utilized in forensic monitoring to improve public health.   6,7

Wurst et al note that a “marker of high sensitivity and specificity capable of monitoring patients in treatment for alcohol or other drug abuse” could “improve therapy outcome and quality of life in patients, increase safety at work places and in traffic, avoid harm to the unborn during pregnancy (fetal alcohol syndrome) and reduce costs by making therapy more effective and reducing productivity loss.”7

But in 2003 Wurst and Gregory Skipper, M.D., FASAM, Medical Director of the Alabama Physician Health Program reported at an international meeting of the American Medical Society that EtG provided proof of alcohol consumption as much as 5 days after drinking an alcoholic beverage and that there are now a substantial number of studies in the world literature that support the clinical importance and reliability of EtG as a marker of recent alcohol consumption.8

“In the future it will be negligent not to test for EtG when monitoring recovering alcoholics,” reported Dr. Skipper.8

Also, in 2003, Skipper pitched the test to National Medical Services, Inc. (NMS labs) who then developed it as a Laboratory Developed Test (LDT).9

Because of its high sensitivity the newly marketed test was suggested as a tool to monitor health care professionals by Skipper in 2004.10   Skipper then approached the Federation of State Medical Boards and pitched the test to them proposing it be used in the assessment and monitoring of doctors by state Physician Health Programs.   In a stunning example of policy entrepreneurship a market was created and filled simultaneously.

“Detection of Alcohol Use in Monitored Aftercare Programs: A National Survey of State Physician Health Programs”11 published in the Journal of Medical Licensure and Discipline in 2004 found that “surreptitious alcohol use was a significant concern” for state Physician Health Programs (PHPs) yet no “best methods for detecting alcohol use.” The 36-question phone interview was conducted with directors of PHPs in 46 states regarding current methods of drug testing and notes:

“Because alcohol is the most frequently abused substance adequate monitoring for alcohol is a major concern. During rehabilitation and recovery, the potential for alcohol abuse may increase due to the lack of efficient screening tests. The ingestion of alcohol while in aftercare is a violation of the contractual agreement made with the monitoring program and may lead to relapse and/or abuse of other psychoactive substances, thus rendering the practitioner unsafe to practice their profession. Therefore, alcohol detection remains an important component of contract compliance and sobriety.”

They conclude that: “EtG can be detected in urine as long as 18 hours after blood alcohol levels reach zero and demonstrates exceptional specificity (100 percent) and sensitivity because even small amounts of alcohol (7 g, or less than one alcoholic beverage) can be detected.”

This very same issue of the Journal of Medical Licensure and Discipline contains an article written by Skipper concerning new marker to detect alcohol use in “recovering physicians” that “has recently been introduced in the United States and an assay for EtG is now commercially available.”12

An EtG above 500 renders it “extremely unlikely” that alcohol was not ingested and adds “ In any event, if testing is positive” in monitored doctors it is advisable to refer them for further in-depth evaluation by clinicians or programs skilled and adept at evaluating physicians.”

The authors describe a “separatist view” of the world that assumes scientific research is sufficiently reliable for public policy deliberations and legal proceedings once it flows out of the realm of science through a pipeline in which the scientific community has ensured through rigorous peer-review and professional oversight that the final product that exits the pipeline is unbiased and produced in accordance with the norms and procedures of science.

This view does not consider the possibility that the scientific work exiting the pipeline could be distorted and contaminated by biasing influences.

If we look at this through the lens of “bent science” several issues arise including a failure to adhere to the norms and standards of toxicology and forensic drug and alcohol testing, an absence of evidence base and glaring conflicts of interests.

Norms and Standards of Toxicology and Forensic Drug Testing

On September 15, 1986 President Ronald Reagan signed Executive Order 12,564 requiring that the urine of federal employees in “sensitive” jobs be sampled randomly for illegal drugs. In 1988 Congress followed with the Drug-Free Workplace Act and drug testing became common organizational practice by the mid 1990s. Most followed the federal norms and procedures in their testing.

The Department of Health and Human Services (DHHS) had established specific cutoff levels that define a positive result.   These values were developed to help eliminate false-positive results.14 The cutoff levels were originally established at a drug concentration that produced an analytic signal some multiplicative factor above the noise level (the signal obtained from drug free urine).

“Urine Drug Testing in Clinical Practice: Dispelling the myths & Designing Strategies cautions about “caveats to interpretation.” “As with any unexplained test result, it is important to clarify the interpretation with someone knowledgeable in clinical toxicology.”16

What was in the pipeline when the EtG was proposed as a forensic monitoring tool can be illustrated below:

Taking Advantage of a Loophole

The EtG was developed by NMS labs as a “Laboratory—Developed Test” or LDT. The LDT pathway does not even require proof of validity, that the test is actually testing for what it claims to be testing, and with no FDA oversight a lab can claim any validity it wants in its marketing and sales, and they did.   Proponents for regulation of LDTs argue this lack of oversight is a direct threat to patient care and safety. An viewpoint piece in JAMA states that a   “patient’s life or death could hinge on whether a single, unregulated diagnostic test result is meaningful.” 17

In the case of EtG Skipper arbitrarily chose a value of 100 as a cut-off for EtG. The rationale behind this value is not cited. Interference with foods, medications and environmental exposures had not been worked out. The results were predictable.

Aftermath was Predictable and Therefore Avoidable

The case of EtG is exemplifies ‘policy entrepreneurship” and “bent science” at its worst. It shows how junk-science can be introduced into the market without any real difficulties or meaningful opposition and how self-interest is promoted in defiance of science in an effort to manipulate public policy. This is nothing more than opportunist exploitation of the regulatory framework and the FSMB eagerly complied.   Without this “regulatory sanctification” none of these tests would have ever made it to market.

EtG was subsequently found to be so sensitive that it could measure incidental exposure to alcohol in foods, over the counter cold medications, mouthwash18,19, hand sanitizer gel20, nonalcoholic beer21, and nonalcoholic wine.22

“Exposure to ethanol-containing medications, of which there are many, is another potential source of “false” positives.

Forbidding patients/subjects access to such medications may be unrealistic, and even unwise.”23

The United States Substance Abuse and Mental Health Services Administration warned against using a positive EtG as primary or sole evidence of drinking for disciplinary or legal action.24 The advisory states:

“Although positive biomarker results should be taken seriously, use of certain biomarkers, such as EtG, is now warranted as stand-alone confirmation of relapse because research has not yet established an acceptable standard to distinguish possible exposure to alcohol in various commercial products from consumption of alcoholic beverages.”

The Wall Street Journal in 2006 reported the problems with the EtG to the general public.25

The authors of a 2011 study demonstrating that hand sanitizer alone could result in EtG concentrations of 1998 concluded that:

“in patients being monitored for ethanol use by urinary EtG concentrations, currently accepted EtG cutoffs do not distinguish between ethanol consumption and incidental exposures, particularly when urine specimens are obtained shortly after sustained use of ethanol containing hand sanitizer.”26

Sauerkraut and bananas have even recently been shown to cause positive EtG levels.27

A 2010 study found that consumption of baker’s yeast with sugar and water28 led to the formation of elevated EtG above the standard cutoff.

EtG can originate from post-collection synthesis if bacteria is present in the urine.29 Collection and handling routines can result in false-positive samples.30

EtG varies among individuals.31 Factors that may underlie this variability include gender, age, ethnic group, and genetic polymorphisms.

The Cochrane Collaboration does systematic reviews of the literature using conscientious, explicit, and judicious criteria to in order to produce and disseminate only high quality and evidenced based health care, exclude bias, and enhance transparency.

The Cochrane database is internationally recognized as the standard in evidence based health care.   It records just 5 controlled trials under the topic ethyl glucuronide.22,31-33

These 5 studies represent the only high-quality evidence regarding EtG to date. Information provided by the five studies suggests the following, and only the following:

During this time period any rational authority would have admitted error and removed the test from the market. Skipper’s approach was to keep raising the cutoff level from 100 to 250 to 500 to 1000. With EtG paving the way for other laboratory developed tests he then added “confirmatory” LDTs such as EtS and PEth. The EtS was found to have the same problems and PEth inevitably will but this is now a billion dollar market and they plan on using these tests on almost everyone including kids.

There has been no academic, public policy or conflict of interest analysis of all of this. As probably the worst case of bent-science in history there needs to be.