But in this Court, what Diff’rence does appear!
For every one’s both Judge and Jury here;
Nay, and what’s worse, an Executioner. 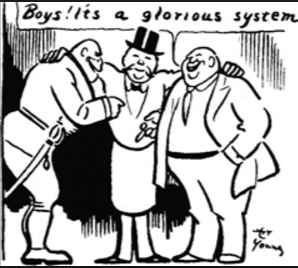 Regulatory capture is a form of government failure that occurs when a regulatory agency created to act in the public interest, instead advances the commercial or political concerns of special interest groups that dominate the industry or sector it is charged with regulating and introduced in an article by George J. Stigler in 1971 entitled The Theory of Economic Regulation. The main idea of the article can be summarized in Stigler’s (1971: 3) affirmation that:

“…as a rule, regulation is acquired by the industry and is designed and operated primarily for its benefits.”

The basic hypothesis of Stigler is that an industry may use—or rather abuse—the coercive public power of the State to establish and enforce rules in order to obtain private gain.