“The biggest problem Straight has is knowing how good it is.”–Dr. Robert Dupont, M.D., 1981

In 2012 former Nixon Drug Czar Robert Dupont, MD delivered the keynote speech at the Drug and Alcohol Testing Industry Association annual conference and described a “new paradigm” for addiction and substance abuse treatment. He advocated zero tolerance for alcohol and drug use that is enforced by monitoring with frequent random drug and alcohol tests. Detection of any substances is met with swift and certain consequences. He proposed expansion of this paradigm to other populations including workplace, healthcare, and schools.

Robert Dupont was a key figure in launching the “war on drugs” which is now widely viewed as a failure that has turned the US into the largest jailer in the world.

As the founding director of the National Institute on Drug Abuse (NIDA), he administered a 1.8 million dollar grant in 1972 to an experimental drug rehabilitation program in Florida called “The Seed,” that was later investigated by congress who noted the methods used by Seed were similar to those employed on American POW’s by North Korean Communists.

After leaving NIDA he became a paid consultant for a non-profit  “family oriented treatment center, “Straight, Inc. praised by Dupont as the “best in the country.” …”the biggest problem Straight has is knowing how good it is.  And I have taken it upon myself to do what I can to expand it nationally.” (Sarasota Herald-Tribune, Feb 9, 1981). 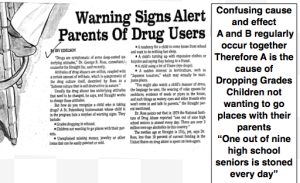 Straight did not treat addicts but “troubled teens,” mostly referred by concerned parents. When authorities closed Straight in Massachusetts they were cited for treating a 12 year old girl for drug addiction when Straight’s own record showed that the only

drugs she had used was that she had once sniffed a magic marker! Straight, inc.., torture as treatment. and indoctrination that killed scores of kids by dehumanization, humiliation, and abuse leading to helplessness, hopelessness, and despair. These moral preening profiteers exploited parents fears to admit children to these inpatient boot-camp money trees. Propaganda, disinformation, junk science, and overt fraud as standard operating procedure. Dupont championed these programs as the paradigm of drug abuse treatment and used misinformation, junk science, and propaganda to promote them.

Straight executive Christopher Yarnold stated that “anybody that is using a drug that is mood-altering has a problem.  Okay.  He has a problem.  From now until eternity he will be chemically dependent,” and must be treated with “holistic” care.  Drug use in any form is harmful and requires treatment.

Once referred to these programs these children were subject to mental, psychological, and physical abuse and indoctrinated into 12-step  prohibitionist dogma at the hands of unqualified zealots.  The legacy of this program of coercion, control, 12-step indoctrination and abuse can be seen on this facebook page in memory of those who died. 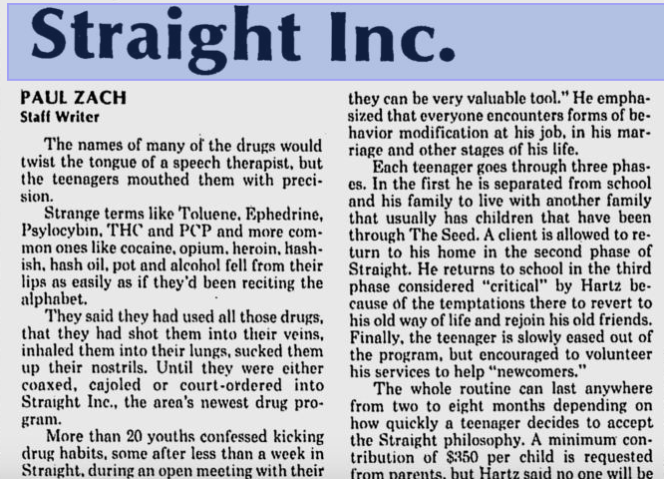