As a specialist in geriatric medicine I have experience in taking care of a number of  doctors who were referred to me for suspected memory problems. Still operating and teaching residents in his 70s, my first was a well-respected surgeon, a pioneer or Maverick who had made advances in his particular subspecialty.  Known for his detailed knowledge of the history of medicine and sharp clinical acumen, he had not seemed himself for a while.  His colleagues noted he appeared slower,  fatigued and forgetful at times (not remembering his keys, having trouble finding the right word).  An internist friend and co-worker who knew him for 50 years curb-sided me and asked if I would see him.  He did not have a primary care physician or even seen a doctor professionally for decades (a common phenomenon in this age cohort of doctors).

I met him the next week and he readily admitted to having difficulty concentrating and having trouble with his short term memory.  On taking his history he told me of his life and career which started as an intern in Boston in 1942 and he was on duty the night 492 people were killed in the  Cocoanut Grove fire with many of the victims transported to his hospital.  “I can see every detail as if it were yesterday–beautiful young women wearing fashionable dresses and gowns and young men in formal evening wear who looked as if they were sleeping but were dead.”

“Gastric reflux ” was the only medical problem he reported, adding it was well controlled for the better part of a decade with anti-reflux medications from the office sample closet.   I tested his memory with several cognitive scales which showed some mild deficits in short-term memory and sent him to a neuropsychologist for more comprehensive testing.  His physical examination, including a comprehensive neurological exam was normal.  I ordered the usual lab work up for dementia to look for possible metabolic causes and his B12 level returned markedly low–a result of his long-term use of proton pump inhibitors.  He was given an intramuscular injection and started on high doses of oral B12.  As one of the “reversible’ causes of dementia he was back to his usual sprightly self several months later.

Another, a 70 old psychiatrist still teaching medical students and residents had asked a third-year psychiatric resident out on a date on two separate occasions. She reported him to administration on the second request.  When I  asked him about the incident he replied he didn’t see what was wrong with what he did and it was being blown out of proportion.  “She’s in her 20’s” I said to which he replied “Well I’m only 36.” Still giving lectures to first year medical students without error or pause from knowledge he learned long ago, he could not identify a pencil or a watch when I pointed to them and asked what there were. He knew neither the month, season or year.  After an MRI and neuropsychological testing he was given a diagnosis of probable Alzheimers disease.   He had no spouse or children and his work was his life.  After that he became  profoundly depressed and six months later was dead.

Another  elderly doctor, an internist, had a fairly sudden sudden onset of memory problems and symptoms of delirium.  It turned out he was having trouble sleeping and his cardiologist prescribed him Dalmane, a benzodiazepine similar to  Valium (medications that have a whole host of adverse effects in older patients including memory problems and falls).  But valium has a half-life of hours whereas Dalmane has a half life of days.   The medication was stopped and he was back to normal after a few days.

Aging  is associated with an increased  decline  in many areas including  cognition, motor-skills, muscle strength, and vision that can individually or cumulatively create risk to the person or others in a variety of situations (driving, living situation, occupation).

With advancing age comes advancing risk and the recognition and vigilance of others is often necessary for intervention. If the risk is recognized the problem can be addressed by the appropriate healthcare providers and specialists.

Doctors are not immune from cognitive impairment or dementia and the perspicacity of others is necessary should this occur.

Recognition and awareness are important.  So too is an assessment by a qualified physician Board Certified in Neurology, Geriatrics or Geriatric Psychiatry who has education and experience in the diagnosis and treatment of memory disorders.

In 2009 Dr. Ralph Blasier, M.D, J.D., published an article in the Journal  Clinical Orthopaedics and Related Research entitled “The Problem of the Aging Surgeon: When Surgeon Age Becomes a Surgical Risk Factor” discussing the ability of older physicians to practice medicine safely and effectively.

His primary message is that a decline in physical and cognitive abilities is associated with the aging process and that these issues are especially pertinent to the field of medicine.

An area  little researched, Blasier gives anecdotal examples such as a surgeon in his late 80s who had to regularly depend on younger colleagues to finish his operations. He concludes that these anecdotal examples suggest many surgeons lack insight into the degradation of their own skills and suggests recognition, insight, and education can help facilitate retirement of the aging surgeon  before  a decline in competency and skill creates a problem.

The awareness, education and insight of others is necessary to identify age associated illness in doctors who can then be referred to the proper specialists for evaluation.  And although no evidence base exists, anecdotal reports such as these caused some groups to see an opportunity to increase the grand scale of the hunt.

As with the “impaired” and “disruptive” physician, the “physician health and wellness movement” organized as the Federation of State Physician Health Programs (FSPHP) is linking the “aging” physician with threats to patient safety and  hospital liability.  “Experts say doing nothing could result in lawsuits, higher liability insurance rates, ruined reputations for practices and all involved, and even possible losses of practices and the licenses of non-reporting physicians.”

And if you look at the articles and presentations aimed at  the administrative, regulatory, and legal arenas of medicine it appears a new moral panic is percolating in the “physician wellness” cauldron.

Labelling a group dangerous and creating fear in those responsible for that group is an effective means to sway policy and opinion.

With absolutely no evidence base these groups have acted as   “moral entrepreneurs ” and used this same methodology to successfully change policy and regulation in the medical profession and advance their goals.  The methodology is to

1. Label a group and link that group to danger

2. Offer to assist in identifying and eliminating that danger

3. Corner the market and control all aspects including assessment, testing and monitoring by swaying those in authority to make it public policy and regulation. 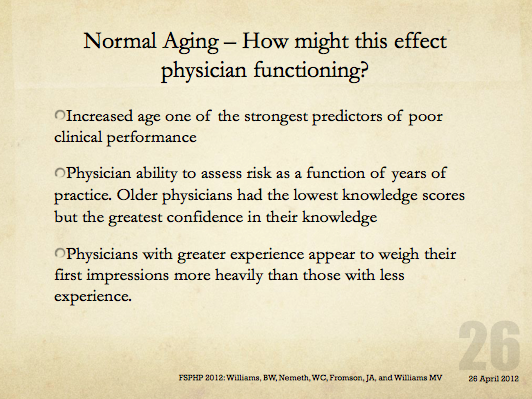 The methodology is not new–witches are real, witches are dangerous and witches need to be identified and exterminated at all costs.  Convince the authorities to assist you in protecting the public from harm and advance  the greater good

In this manner the FSPHP has convinced state medical boards to adopt and enforce policies that have incrementally and systematically increased their autonomy, scope and power since they first cultivated a relationship with the Federation of State Medical Boards (FSMB).  This occurred in 1995 when they took an uninvited seat at the table of power by offering a non-disciplinary “safe harbor” as an alternative to discipline for doctors impaired by drugs or alcohol.

Since then they have increased their scope from  the “impaired” to the “disruptive” to everything else.  Arising from the “impaired physicians movement”  as “addiction specialists” these doctors whose specialty of addiction is not even recognized by the American Board of Medical Specialties have now become the “experts” in all matters related to physician health.  Jacks of all trades covering neurology, psychiatry, geriatrics, and occupational medicine.

A 2011 updated FSMB  Policy on Physician Impairment  states that Medical Boards should recognize the state Physician Heath Program (PHP) as their experts in all matters relating to licensed professionals with “potentially impairing illness,”   and these  include those potentially impairing maladies that increase as we age.

They are also using “everyone else does it why don’t we?” logical fallacy.  According to a Washington Post article “other professions are subject to age-related regulations. For example, airline pilots must undergo regular health screenings staring at age 40 and must retire at age 65. FBI agents must retire at age 57.”

Proposing drug testing in doctors a  JAMA article  uses this same logic stating when sentinel events occur in the airline, nuclear power and railway industry the get drug tested.  However all of these industries use FDA approved tests, certified labs, strict chain-of-custody and MRO review in their drug testing.  One of the authors of the JAMA paper, Dr. Greg Skipper, introduced the non-FDA approved and unvalidated Laboratory Developed Tests currently used in PHPs such as EtG.   He claims no conflicts-of-interest.   Comparing drug testing to industries that use the highest quality of testing and safeguards to protect the donor from false-positives to the junk science used in PHPs is comparing apples to oranges. Which one do you think they’s be using in the random drug testing of doctors?

Furthermore, airline pilots, railway engineers and nuclear power plant employees have a choice of assessment and treatment centers should they get a positive test.  Doctors do not.  They are mandated to “PHP-approved” facilities.  This is enforced by state medical boards as they adhere to an ASAM   Public Policy Statement  recommending only “PHP approved” treatment centers be used for assessment and treatment and a recent  audit  found the PHP in North Carolina could not provide any measurable indices  or qualitative indicators of how an assessment center is stamped “approved.” The best they could come up with is “reputation” and other ‘informal sources.  What the audit missed is all of the 19  out-of-state “PHP-approved” centers Medical Directors can be found on this list. 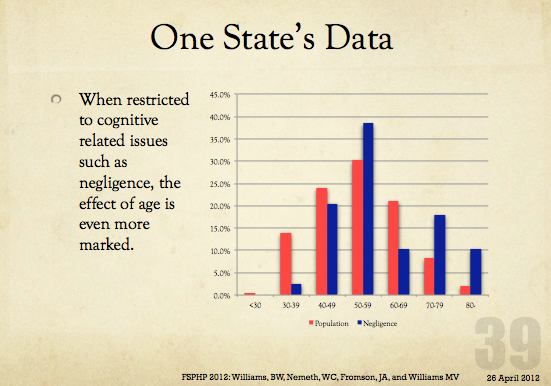 And what will happen with the “aging physician” is the same.  Doctors will be forced into “assessments” at “PHP-approved” facilities where they will be misdiagnosed, over-diagnosed and forced into monitoring contracts under threat of loss of licensure. Goodbye Dr. Welby!